The Town of Sabattus was first incorporated on March 21st, 1788, with the name of Webster.  Its outlying borders changed from time to time over the years, but its basic structure has been the same, more or less since that time.  The town is a square, roughly five miles on each side.  The towns of Lisbon, Bowdoin, Wales, Litchfield, Greene and Lewiston border it.  One major change occurred in March of 1840, when the town was split into two towns; one with the name Webster and the other called Lisbon. 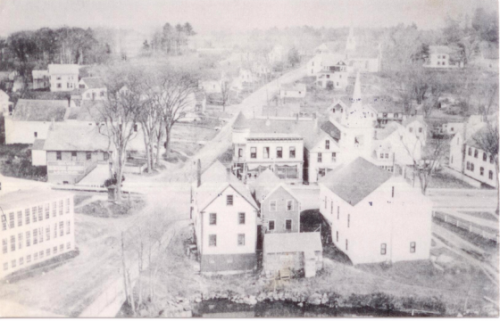 One interesting fact is that town inhabitants had to be voted in as citizens.  If for any reason, the town was against a new arrival moving to the area, they simply voted against their addition to the town.

The name of Sabattus came from one of the chiefs of the Indian tribe that had lived in this area before the settler’s arrival.  When colonists first settled the town, the Indians had already left, which was said to be a very good thing, as the two cultures would not have meshed well.  The only parts of the town to originally bear the name of Sabattus were the lake, the river and a small mountain.  The spelling has also changed, from Sabattis to today’s spelling.

In 1780, when at the age of 22, Jesse Davis moved here from Massachusetts, he settled on a tract of land his uncle Dr. Jonathan Davis, of Roxbury, Mass. had conveyed to him.  The agreement was that Jesse would make a clearing, and build a sawmill and a gristmill and buildings for a tavern.  Although the mills no longer stand, the original tavern building is now the home of Ed Gardner on the Crowley Rd.  It was built in 1791, and is the oldest standing house in Sabattus.

In 1847, the town voted at a town meeting to raise $150 to build a town meeting house that year, unless postponing the construction until the following year could save $25.  Comparing costs of the era, fifteen years later, during the Civil War, the town was paying $200 for each man called to serve nine months of duty.

In 1857 a group of men from the Maine State Seminary School (now Bates College) visited the Davis Farm and asked Jonathan Davis, Esq., for a donation to help purchase a large bell for the tower of Hawthorne Hall on the campus.  Mr. Davis gave them $350, and when the bell arrived in Boston from England, he sent his son to get it.  With a team of oxen, his son picked up the 1,000-lb. bell, and delivered it to Lewiston.  An inscription on the bell bears Mr. Davis’ name.  The following year, Mr. Davis gave $50 more, to cover the shipping charges.

During the Civil War, the town sent several men to fight for the Union.  Many men received pay or bounties, of $200.  As the war raged on, though, the town found itself sending its share of men but not raising enough money to pay them.  Some went with less pay than others, some with none, and some that left families got no support for their families. 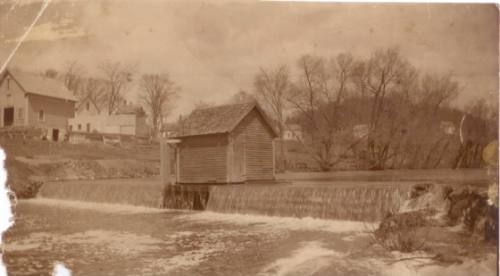 In the 1860′s, local resident Franklin Simmons had become quite an accomplished sculptor.  Following the Civil War, the city of Lewiston paid him $4,000 to create the Soldier Monument in the City Park.  After he moved to Italy, he was asked in 1876, to make a statue of Edward Little, the founder of the Auburn high school.  The statue now stands at the entrance to the school grounds.

An 1893 history of the town tells of the post office, which was located at the “four corners” near Crowley Rd. and Rt. 9.  At the same time, the village of Sabattusville had its own post office, the location of which moved with every new postmaster.  As the postmaster’s job was a politically appointed position, the office followed the new postmaster from store to store, or home, etc.

In the early part of the 20th century, raising a family of eight to ten children wasn’t uncommon.  Although Mr. and Mrs. Edward Gayton missed those numbers, they still deserved some sort of recognition.  Mrs. Gayton was named “Mother of the Year” after mothering nineteen children and she received several prizes, including a hair styling, among other things.

In 1910, the Catholic parish of Our Lady of the Rosary celebrated some of its masses at Martin’s Point, on Sabattus Lake in the summer.  It also held services at the Greene St. schoolhouse, now the St. Amand property on Greene St., in the early 1900′s.

In or around 1910, a group formed a business called Sabattus Mineral Spring Water.  The source of the water they sold was a clear stream flowing down the side of Sabattus Mountain.

June of 1920 saw a group of men from the Lewiston-Auburn area explore the “Devil’s Den” on Sabattus Mountain.  The legend of an Indian devil or spirit residing in the cave in the mountain had been around for many years.  The men went in to investigate, but found no trace of human or animal life in the dark, wet cave.

In 1922, the family of Lyman Waterman moved their newly purchased farm on what is now Rt. 126.  Moving a family from Buckfield to Sabattus would be hard enough to imagine 70 plus years ago, especially when one learns the move took place during the winter.  Add to the time of year the fact that the move included the herd of cattle the family owned, and the trip sound a bit more difficult.  Consider though, the shortcut made available by the ice-covered Sabattus Lake, and the move sounds more unreal than difficult.  The herd was moved from the Greene end of the lake to the Sabattus end of the lake, close to the new farm, by walking the cows across the ice. 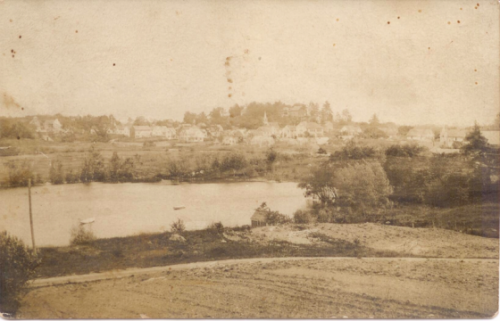 After the Huen store burned in 1936, and the debris was cleaned out, there was nothing left but the hole where the foundation was.  It was no doubt surprising for the local constable one morning to find a man attempting to drive his car, which had gone off the road the day before, out of the hole.  The man had just bought the car the day before, but was unable to drive it for some time afterward, due to his jail stay of sixty days for drunk driving.

In June of 1939, the Park Mill, complete with machinery and furnishings was put up for auction.  A big controversy resulted in the following year, regarding ownership of the mill, as a firm from New York claimed right to purchase the mill because of a $1,000 deposit they had made.  Their failing to act on this deposit for a long period of time caused the town to claim the deposit and rights to sell the mill.

In the early 1960′s there was an effort to spur interest in merging the town with Lewiston.  Some of the reasoning was attributed to the educational facilities, as the Sabattus high school was old and overcrowded at the time.

In the 1970′s the Sabattus Police Association formed and took an active roll in providing entertainment opportunities for the town’s kids.  They sponsored dances, parties, Junior Olympic field days, and a local Boy Scout troop.

In January 2003, the Town Office opened for business in the new municipal building.

Our thanks to former State Senator Albert Stevens who was responsible for the research and content appearing on this page.